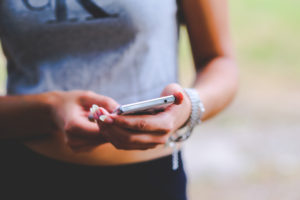 Sexting is a relatively new concept when it comes to the law. “Sexting” refers to texting sexually explicit messages or exchanging sexually explicit photos through text-messaging. This concept has created quite the controversy for teenagers and college students. All 50 states have some type of legal enforcement when it comes to the issue of sexting. However, in States that have not directly addressed the issue of sexting it is very possible the case could be deferred to the states child pornography laws.

According to an article written by the Associated Press, within the last five years 20 states have enacted laws that directly deal with sexting. Last month New Mexico removed any criminal charges when it relates to teen sexting altogether. At least 12 different states are considering sexting laws for the ballot this year and many aim to create “new” class of crime that would apply to young people (AP News).

Generally it’s good to keep the following in mind:

Child pornography, also called “child sexually abusive material” in the State of Michigan. Under Michigan law this is know as any depiction, including a photograph or video, of a person younger than 18 engaged in a sex act. “Sex act” is broadly defined to include nudity and any touching of the private parts of the body.

It is also a crime in Michigan to distribute or possess with the intent to distribute any obscene material. Although obscenity is not defined under Michigan law it is reasonable to conclude that sexually explicit photos of a minor would fall into this category. Distribution of obscene material is a less serious crime than child pornography.(Mich. Comp. Laws Ann. § 752.365.)

Sexting can also be a crime under the federal law. The PROTECT (Prosecutorial Remedies and Other Tools to end the Exploitation of Children Today) ACT of 2003 to possess, distribute or receive with the intent to distribute any obscene visual depiction of a minor engaged i sexually explicit conduct. (18 U.S.C. § 1466A(a)(1).)   (Other Federal Acts can be found here)

There have been numerous of sexting cases in recent years that have made national headlines. It is important that teenagers and college students are aware of the harsh legal consequences that could stem from sending or receiving sexually explicit photos. The law is quickly trying to catch up with technology when it comes to these issues and in the near future it is likely that there will be more laws that directly deal with sexting.